“He has made everything beautiful in its time. He has also set eternity in the human heart; yet no one can fathom what God has done from beginning to end.”  Ecclesiastes 3:11

I’m sure almost all of us can recall viewing the original Star Trek television series, where unimaginble ideas and pictures were painted week after week, about the heavenlies.  I recall the opening of each episode that said: ‘Space, the final frontier…..these are the voyages of the starship Enterprise. Her five year mission: to explore strange new worlds, to seek out new life and new civilizations, to boldly go where no man has gone before’

Man’s fascination with the universe, and the ‘After-Life’ has been going on since life on earth began. It’s amazing to not be able to see with your own eyes how vast and breathtaking it is when we look up at a clear sky at night; all the stars and planets that we can see with the naked eye.

I remember back, before I was really a believer, I took a trip to visit some friends near Boise Idaho.  The scenery was beautiful, the streams were streaming, the birds were just being birds, the scent of the air was oxegenated if you will. For someone like me that had never been in that kind of an enviroment, it was all spectaculor.

I remember one of those days I was there, and I asked some of my friends there what was the best time to go outside and just view the heavens.  They shared with me that I would get the very best look at around 3-4 a.m.  Well, I stayed up, needless to say, I was amply rewarded.  Never in my life have I ever seen the heavens so, up close.  The background of the stars was pitch black.  The stars were numerous, more than I could ever conceive in counting.  I recalled the promise God gave Abram, and how He used the stars He created as a calculator. Absolutely unbelievable!

There is a point, in the reasoning capacity that God has given to every man, when curiosity of Creation, can turn one or two directions.  For most, the unknown remains a fantasy, based upon what they can see.  The other direction is when rational thinking about the created things we see each day, leads us to wonderment.  If all this is as beautiful and complex as I see it, there must be someone behind all this.  This is where the thoughts of eternity begin to fill one’s soul, inside their hearts.  This is when God, Himself reveals Himself in love, and majesty.

There is a well-known missionary and author named Don Richardson who uses the phrase ‘Eternity in their hearts ‘ to describe redemptive analogies in most all aboriginal cultures. Almost every culture has traditions, customs, or ways of thinking that reflect basic Biblical truth.

What a comfort to know that somehow, sometime, every person who has lived on this planet, has or will here the truth about God in their lifetime.  This means that we don’t have to ‘know everything’ in this life; and yet, there will come a time when we will know all things.

And yet how often do we find ourselelves troubled and worrying about what is going to happen tomorrow.   To some tomorrow may be a debt that needs to be paid, to someone else it may be getting the test results of that CT scan.  Maybe it’s signing the divorce papers, or having the house youi’ve lived in for years being taken away. Oh how we can so easily become ensnared with the things of this world, that can rob us of looking forward to what God has coming!

“He has made everything beautiful in its time. He has also set eternity in the human heart; yet no one can fathom what God has done from beginning to end.” 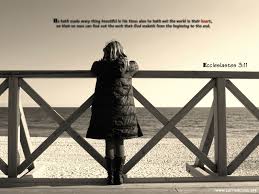 When it’s all said and done, it’s what’s in your heart that really counts.  Fot most of us we have found the true meaning of this thought when we come to know the King of Eternity, Jesus Christ.  Jesus say’s that He will “abide in you, and you in Him”.

Solomon,  the Preacher finished the the thought that All things that happen in our lives will come as God apportions their designated times and places, each one leading us closer and closer to Him who dwells in eternity.

I don’t know about you, but I really like that word ‘beautiful’, but isn’t it ironic that the one word used in this book that stands out like a sore thumb is that other word vanity.

The word  Vanity is defined as – excessive pride in one’s appearance, qualities, abilities, achievements.  Solomon, now an aged but wise man is begining to see things in a different light, or maybe a different perspective..   Of course we need to keep in mind that anything he wrote here is inspired by the Holy Spirit himself.

I can’t help sharing with you the many times when I was growing up, how many things around me became so important, so much better, so much more…….beautiful than the way I saw myself.  I remembered when I was 7 and playing in the schoolyard around a ‘Teeter-Tower, waiting for my turn to get on and be lifted up and down with another accross me.  Well, unfortunately, I was not paying attention, whene the kid on the chair of the teeter-tower jumped off, and the metal seat smacked my lower jaw and just about knocked me out.

The next thing I know, I’m looking at my face and relieved nothing looked out of place, until that is, I began to smile, and noticed the the force of the metal chipped one of my front teeth and separated my too front teeth leaving a gap.  Sadly, we didn’t have the money to get it fixed, and I lived my life to this day with that gap.  It became one of the not so beautiful parts of my body. That along with a huge birthmark on my left leg, made me so self concious, that I avoided swiming and putting on shorts.  Then, if that wasn’t enough, I began to lose my hair at around 27.  Not so beautiful i thought often.

That, my friend is from a human perspective, which brings me to my final muse. How expanse is human perspective in relation to eternity?  The answer is, we simply don’t know. Man can try to determine the makeup of what he sees around him, but he can never understand the origin of how it got there without admitting that there has to be an Author and Maker of it all.

I am reminded of an article I read years ago about Creation. They gathered together 10 world renowned scientists to define how the universe we see came to being.  A majority agreed with one of the scientist who said that it all happened in a series of explosions with invisible atom particles coliding with each other…and so on and so on.  One of them, who’s specialty was Physics, concluded that, it is “mathematically imposible for any of what we see to have happened accidently.  He went on to say that there ‘must be a mathematical mind behind all creation. He was of course ridiculed for his hyposis, because he came short of saying that, indeed, God was behind it all.

And so since God is the One who created us, and has made us, ‘like Him’, and has ‘formed you’ we have assuarance, just by looking around at the rest of all He has done, that He is not only caepable, but is committing Himself to make it all beautiful at some point in our lives.  When, you might say is that point?  ‘In His time’….. Where and When exactly is that ‘time’?

“He has also set eternity in the human heart; yet no one can fathom what God has done .from beginning to end.”

Well, this gets very interesting, God, Himself has set this time as eternity, and He has hidden it in a safe place….your heart. The Hebrew translation defines this word eternity as ‘concealed, out of mind’  In other words, you can think about eternity, but you’ll never be able to describe it, until you get there.   Also kinda neat is where God chooses to place something that defines forever and ever… the ‘human heart’.  The heart in Scripture is always looked at as the seat of your emotions. It’s the place where faith springs up from.   It is going to take some faith to believe this promise, that ‘He made everything beautiful in His time.’. At the right season, when it’s time for us to leave this place, things will be beautiful.

Where is this place eternity?  It is wherever Jesus is. Where is Jesus?  ‘Seated at the right hand of God’  Where is that?  In heaven.  Heaven is the most beautiful place ever! I like that in heaven, God will ‘wipe away all tears, there will be no more suffering there,……. “ For the Lamb who is in the midst of the throne will feed them and will lead them to the fountains of living waters. And God will wipe away all tears from their eyes. ” Revelation 7:17

“He has also set eternity in the human heart; yet no one can fathom what God has done .from beginning to end.”

I like the idea that eternity is in safe keeping.  While our hearts are ‘deceitfully wicked’ they are at the same time governed by Jesus Christ who happens to be in our hearts.  Maybe that’s the reason Scripture says, “there is no weapon formed against us that shall prosper”

What a deep thought that the Holy Spirit gives us the privilidge to consider…. and yet it is so easily revealed in the Scriptures that ‘speak about Him’.  Jesus said, ‘I am the Alpha, and the Omega, the Begining and the End’

Oh how privilidged we are in our generation that God has given us such marvelous promises to think on, that we can ‘hang our hats on”.  Eternity.  He has made everything beautiful in its time…. Solomon, thinking of the good and the bad, finally understands the balance, that it’s just a matter of time, before everything becomes beautiful, the way He made it!