Now after the Sabbath, as the first day of the week began to dawn, Mary Magdalene and the other Mary came to see the tomb. And behold, there was a great earthquake; for an angel of the Lord descended from heaven, and came and rolled back the stone from the door, and sat on it. His countenance was like lightning, and his clothing as white as snow. And the guards shook for fear of him, and became like dead men. But the angel answered and said to the women,

“Do not be afraid, for I know that you seek Jesus who was crucified. He is not here; for He is risen, as He said. Come, see the place where the Lord lay. 7 And go quickly and tell His disciples that He is risen from the dead, and indeed He is going before you into Galilee; there you will see Him. Behold, I have told you.”   So they went out quickly from the tomb with fear and great joy, and ran to bring His disciples word.

The Resurrection of Jesus Christ is the most important event not only in the Christian faith, but in the whole world.  Never has anything like it ever happened with such documentation from both the Bible and secular writers, that this Jesus, really was crucified on a cross at Calvary.  That He really was put in a sealed tomb, with veteran Roman soldiers standing guard,  and finally; that He really did rise from that tomb, and was seen by hundreds for forty days, until He ascended at Bethany to take His place at the right hand of God, where He is today, ruling with all authority, “of things in heaven, of things on earth, and all things under the earth”

The Resurrection of Jesus Christ is the very foundation of all Christian doctrine that hinges on the truth of this account.. 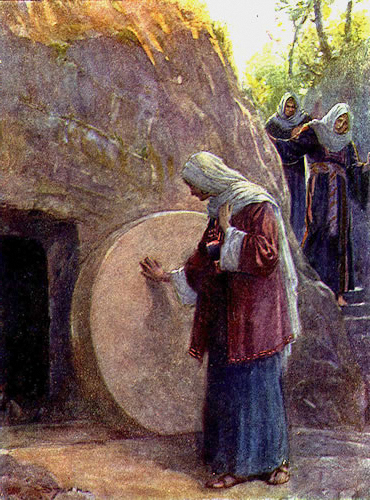 Early Sunday morning several women, Mary Magdalene, Mary the mother of James, Joanna, and Salome, went to the tomb and discovered that the large stone covering the tomb’s entrance had been rolled away. An angel declared to them,  “Don’t be afraid! I know you are looking for Jesus, who was crucified, He isn’t here! He is risen from the dead, just as He said would happen.” Matthew 28:5-6

‘Just as He said it would happen’

In all four gospels Jesus had given this hope to His disciples that He would rise from the grave.  Sadly, many of the Apostles of Jesus, didn’t believe that Jesus was going to literally be raised from the dead.  But, the women, they faithfully made their way to the tomb where they last remember He was laid.

The Gospels record that when Nicodemus and Joseph brought the body to the unused tomb that some of the women followed.  There would be no mistake just where He was laid; no speculation they went to the wrong tomb. The Roman soldiers would attest to that.   Despite all of the drama going on, Jesus kept His word, and rose from that tomb on the third day…. “.just as He said it would happen.”

On the same day of His resurrection, Jesus Christ made at least five appearances.

The eyewitness accounts in the all the Gospels provide undeniable evidence that the resurrection of Jesus Christ really did happen.

2,000 years after His death, followers of Jesus Christ still flock to see the empty tomb, one of the strongest proofs that Jesus Christ really did rise from the dead.

…”for He is risen, as He said.   Come, see the place where the Lord lay, and go quickly and tell His disciples that He is risen from the dead.”

Evidence is indeed wonderful. The Christian faith has an abundance of evidence to support its claim…. the most incredible that Jesus does not lie in grave, He is Risen!   The evidence was clear from that third day all the way to this day March 31, 2013, you can go see for yourself, the tomb is empty.  The greatest miracle is the resurrection of Jesus. Jesus Christ is alive!

The great-grandson of Mahatma Gandhi, in the late 1990’s, took Gandhi’s ashes to the Ganges River as thousands of onlookers sang and chanted. He opened the copper urn and dropped Gandhi’s ashes in the river, proving that Gandhi was still dead.

The Muslims and the Jewish people to this day have fought for control of the tomb of Abraham, Isaac, and Jacob. You can visit their occupied graves just as you can those of like Mary Baker Eddy, Joseph Smith, and Muhammad

They and all the others died and stayed dead; their occupied tombs attest to it. Jesus, however, is alive. His grave is empty.

Jesus said, “All power on earth and heaven has been given to Me” Matthew 28:18    No force could have kept Him down. The Romans killed Him, put Him in a cave tomb, and placed huge boulder at a downward angle in front of the cave, pasted Caesar’s seal on the crypt, and posted Roman guards to protect the tomb. They were only trying to prevent the inevitable…

God used an angel to tell the women something that was so astonishing, that Jesus is risen! so incredible that the angel invited them to come and see for themselves.  And isn’t that what we are asked to do, those of us who need a fresh touch, those who carry such great burdens that they have lost the hope of a new beginning, a fresh start.  The encouragement is simple, Jesus Christ is risen from the dead, He is alive, and if He is alive, and if He is your savior, He can also be your helper, because He is alive!  And when you believe this simple message, than you can go and tell others who need evidence of great news!

The Message:  Jesus Christ is Risen,

The Challenge:  Go out and tell everyone, who is needing to hear good news of hope that God has given His only begotten Son…”that by believing, you will not perish, but have everlasting life”.

“So they went out quickly from the tomb with fear and great joy, and ran to bring His disciples word”

Have you ever had something occur in your life that was absolutely so incredible that you were overcome with great joy that maybe even led you to tears?  The kind of joy that a child has when told something so wonderful is going to happen, and then see the absolute joy in their eyes when it actually happens?  And to listen to the child explain in words the wonderful news they have received?    I believe that that was the kind of joy the women had when they left the tomb.  The Scripture says they went out quickly with fear and great joy, and ran to bring His disciples word”

Could this be the way we once were as children; believing, trusting, that what we were told was true, and as it developed that it was real?   Do we go out quickly with great joy at the opportunity to let someone know that we have the answer to their sadness, loneliness, hurt?

This Easter, I am challenged.  Marty, in the midst of what appears to be death, in this cancer, do you believe that “I am the resurrection and the life”.  And if you do, will you go out quickly with fear and great joy and run and bring my peoples word….. that I am Risen!    Yes, Lord, I will.

Happy Easter to all!    I have included this great poem about a Risen Savior, a King of Kings, enjoy!

Now that’s my King!
David says
The Heavens declare the glory of God
And the firmament showeth His handiwork
No means of measure can define His limitless love
No far seeing telescope can bring into visibility the coastline of His shoreless supply
No barriers can hinder Him from pouring out His blessing

That’s my King!
He’s God’s Son
He’s the sinners’ Saviour
He’s the centrepiece of civilisation
He stands alone in Himself

That’s my King!
He’s the miracle of the age
He’s the superlative of everything good that you choose to call Him
He’s the only one able to supply all of our needs simultaneously
He supplies strength for the weak
He’s available for the tempted and the tried
He sympathises and He saves
He guards and He guides
He heals the sick
He cleansed the lepers
He forgives sinners
He discharges debtors
He delivers the captives
He defends the feeble
He blesses the young
He serves the unfortunate
He regards the aged
He rewards the diligent
And He beautifies the meek

Do you know Him?

That’s my King!
He always has been
And He always will be
I’m talking about
He had no predecessor
and He’ll have no successor
There was nobody before Him
and there’ll be nobody after Him
You can’t impeach Him
and He’s not going to resign